Mon 09: Hike or bike near Lintel

A road near Nordwalde served as our meeting point for the hike and the bike ride. 17°C air, a closed cloud cover, and a gusty wind were reason enough for everyone to wear warming clothes at first. But hiking stimulated the circulation, and the first of the participants took the opportunity to jump into a lake after only a few hundred metres. He reported, that the water was clearly warmer than the air – but the hikers still had a few kilometres to go. 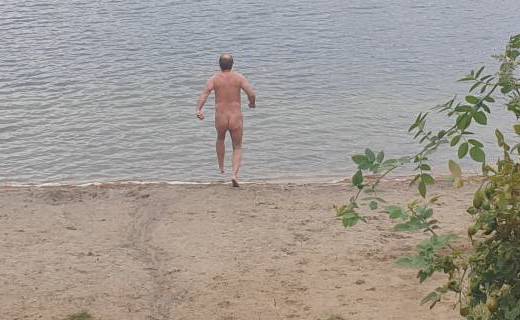 As time went by, the other participants also became warm from inside due to the movement, so that the clothes could gradually be stowed away in the backpacks. Slowly, the air temperature continued to rise and the first gaps in the clouds made way for a few rays of sunshine. We now continued our way in the nude through varied, typical Münsterland over forest, meadow, and field paths. 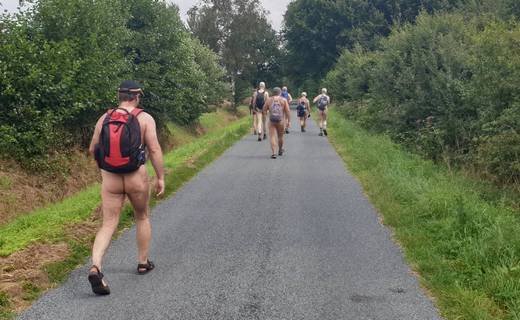 3/8: After a while, everyone has warmed up from inside and moves on, freed of clothes.

During the rest, a dark cloud passed over us and the weather forecast on the smartphone predicted rain. We hurried and reached the lake, which we had already visited in the morning, in time to take a break and swim. The cyclists soon arrived here and we took advantage of this to take a group photo together.

In the meantime, the cycling group had completed their 50 km long tour through rural districts around Nordwalde and Altenberge. On the way, the nude cyclists met all kinds of good-humoured people, who greeted them in a friendly manner, as usual, and who returned the greeting in the same way; some car drivers also honked their horns and smiled. After about 25 km, we took a longer break at a refuge. Forecasted rain did not happen at first. After about 3 hours, the cycling group met the hikers, who were already taking a break at the lake. 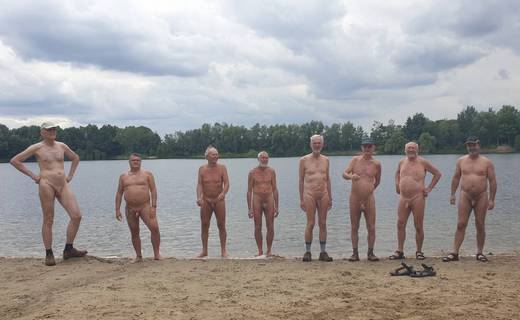 After the group photo, everyone quickly returned to the parked vehicles – just in time, because the forecasted rain promptly started. We drove to the restaurant Lintels Kotten, where the landlord greeted us. He kwows us for years and provides us with excellent food at every stop. During our meal, the rain pelted the countryside outside, but it remained a normal shower after all – soon the sun laughed again from the sky.

Tue 10: Hike or bike near Metelen

A car park in the countryside near Metelen was the starting point for the nude cyclists and hikers, who once again wanted to face the vagaries of the 2021 summer weather on Tuesday. The initial 17°C air again made most of the active participants start clothed – especially the cyclists, who usually add their own speed to the wind speed. 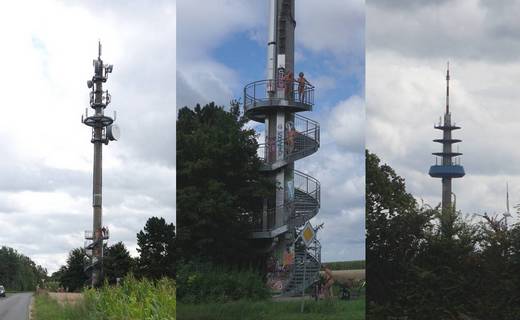 1/11: A mobile phone mast on Schöppinger Berg offers a viewing platform, the telecommunications tower once also carried television transmission antennas.
The cyclists finally got the experience, that the flatness of the Münsterland is by no means universally valid, because on the ascent from Metelen (60 m) to Schöppinger Berg (148 m), some had to push their bikes uphill. The hill, which is visible from afar and was used for military purposes during the Cold War, is now home to two transmission masts and numerous wind turbines. You can even climb up to a viewing platform on the mobile phone transmitter mast to about a quarter of the height. 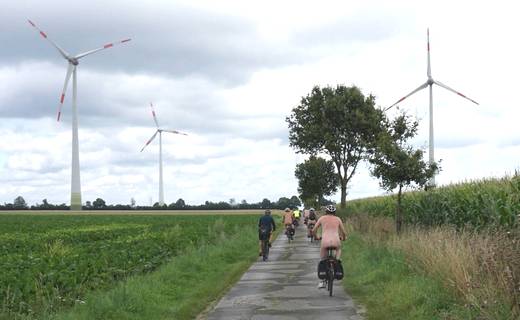 2/11: Cycling under wind turbines is normal in Münsterland.

We had to smile at a policeman coming towards us on his bike, who greeted us with a friendly smile and said: “I don't have to stop and check you – I know what's going on!“. At Kieferngrundsee Lake, hikers and cyclists met again to take a break together. 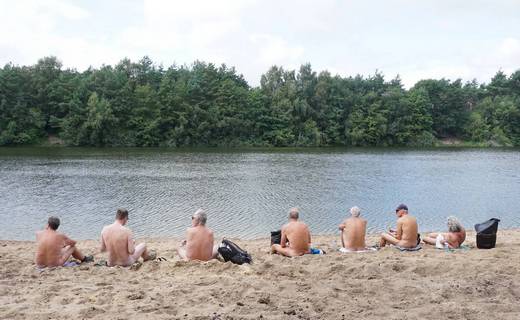 4/11: On the shore of the Kieferngrundsee, we met for a rest.
On the return ride, the cycling group then caught a good rain shower, during which they sought shelter under a group of trees. Another stop was necessary to let a large number of historic tractors of the Wettringer Heimatverein pass. It was pleasing to see, that all the drivers greeted us in a friendly manner and some even had a nice saying ready. 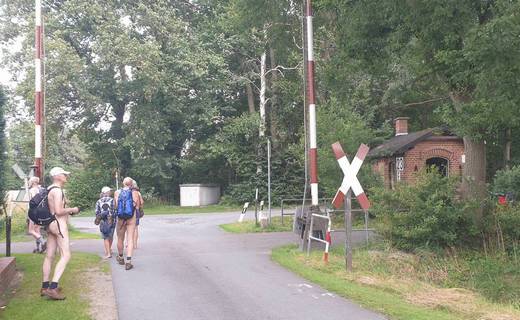 5/11: This barrier could block the crossing of the protected cycle / pedestrian path in between – for example, if a demonstration needs to pass by untroubledly (however, this hasn't happened yet …).

The hiking group did not experience a downpour and was therefore back at the car park much earlier. They hiked a curiosity: a barriered foot/cycle path crossing, which could block the crossing of a path along the former railway line Heek-Burgsteinfurt (WLE-Nordbahn). The disused line was single-track, former passing places for trains meeting each other are now green islands with trees between field and forest. An informational panel on a preserved barrier keeper's cottage provides detailed information on the history of the railway line.

On the further way, the hiking group reached a larger forest area, where the hikers could understand where the name Metelener Heide [en: Metelen Heath] comes from, based on the sandy forest floor.

Summer again at last! Temperatures rose up to 25°C in the afternoon – the coolness of the last few days was forgotten. A car park near Bockholter Berge [en: Bockholt Mountains] was the common starting point for nude hikers and cyclists. 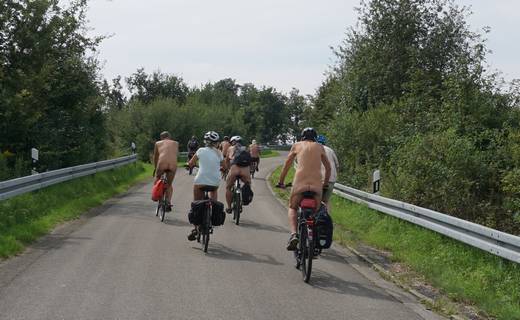 11 cyclists and one female cyclist set off on a 45 km route through the southern districts of Greven and the Rieselfelder fields, which is a retreat for various waterfowl and regenerated plant life. We took breaks as opportunities arose: The first after exactly 1 hour and 15 km on a sunny meadow, the second after exactly 2 hours and 30 km on some logged oak trunks. We could observe swallows flying in and out of a square hole in a garage directly opposite – apparently to feed their offspring.
Remark: The German name Rieselfelder states, that the area was used to trickle away waste water. Since decades, it is a nature preserve attracting a lot of water birds species and also storks. 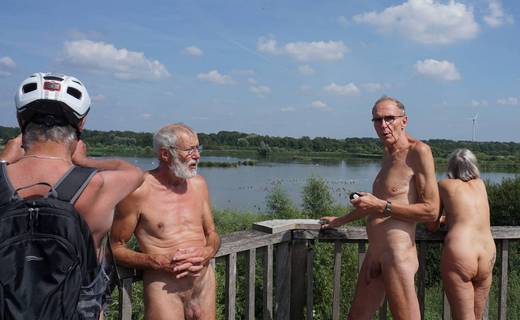 4/15: From an observation tower inmidst Rieselfelder you can watch a lot of wildlife.

Spontaneously, we decided to extend our tour by a detour to a lookout tower with a wonderful overview of the diverse fauna and flora in the Rieselfelder. The rest of the way led us to the Dortmund-Ems Canal, we bypassed the large construction site of the “Neue Fahrt“ and offered bathing enthusiasts another swimming break in the canal.
The hiking group started via Nahrup's Hof to the Dortmund-Ems canal. At a canal bridge, we took a first break, which some of us used for a refreshment in the canal. A group of cyclists watched us from the bridge for a while and then continued. Across the road, we saw a police car. Maybe it was just there by chance, maybe to check, that we were really just naturists hiking in the nude – in any case, it drove away shortly afterwards. 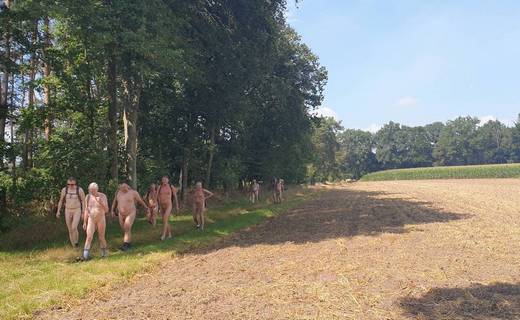 We climbed up to the bridge, crossed the canal, and continued hiking along a narrow forest path. This led us to Bruno's 10 km meadow path tour, which runs through meadows, forests, and fields. Beautiful! 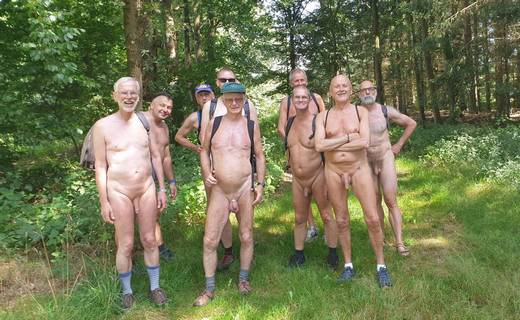 6/15: The hikers pose for a group photo on a forest path.

As we approached the start/finish car park after 20 km, we were first met by a woman cycling, who informed us with a smile that the others had already arrived there. Then we met a couple cycling. First he asked, if there was a place to swim nearby.
“Bathing is possible in the Dortmund-Ems Canal.”, we explained. Then, his female partner asked: “Did you hike in the nude?” “Yes, we do.” “That's great!"”, she exclaimed.
Cyclists and hikers spent the end of the day together for dinner at the restaurant Zum Fährhaus Fuestrup at a marina.

A car park near Bockholt Mountains was the starting point for a hike consisting of two rounds of 10 km each as well as for a cycling tour offered as a variant of yesterday's ride for four iron cycling fans. 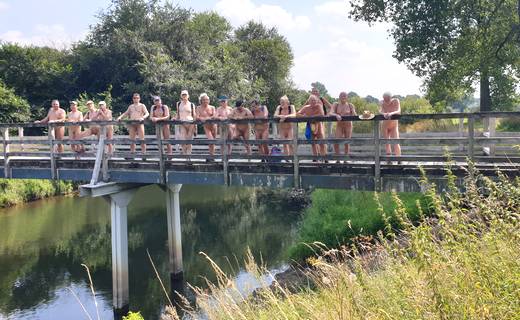 As we were just undressing, a woman approached us at the car park. She showed interest in nude life and gladly accepted the hint “nackt minus wandern punkt de“ (nackt-wandern.de) [en: “hiking minus in minus the minus buff dot info“ (hiking-in-the-buff.info)] for further information. Since she was planning a cycling tour with husband and son, we invited her to join our nude cycling tour – even clothed, if nude cycling was too unfamiliar. Although her husband reported, that they originated from eastern Germany and had already “done FKK“ there, they could not decide to join the bike tour after an internal family discussion.
17 hikers came together for the first 10-km loop and hiked through the Bockholter Berge, along the Ems, and through a farming district near Greven-Gimbte. For nine of the hikers, this tour was enough and they renounced the afternoon loop. There was only one more participant arriving at noon, who knew from the start, that his physical condition was only sufficient for 10 km. 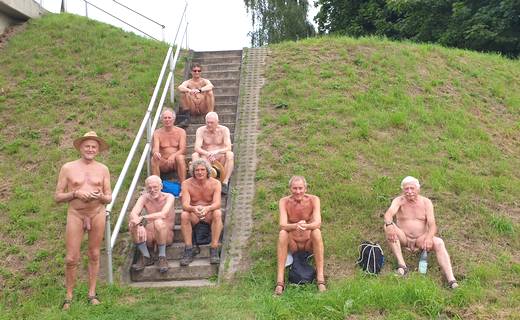 15/15: Rest sitting on steps of a staircase connecting a path along the canal with a bridge.
The afternoon hike led through the Boltenmoor to the Dortmund-Ems Canal and further along the Ems, past the mouth of the Werse through the Bauerschaft to the Fuestrup marina. Later, cyclists and hikers met again for dinner at the restaurant "Zum Fährhaus Fuestrup".
– Report and photos (hiking): Rainer;
report (biking): Jürgen, photos (biking): Friedhelm