On a sunny Sunday in June, two nude hikers chose Bergisches Land as their destination. This time, they opted for a 16 km route about 5 km away from Wuppertal-Elberfeld in a wooded area on both sides of Wupper River. A cumulative 640 metres of altitude testify to the fact, that Bergisches Land certainly deserves its name: it is not difficult to find steep climbs to train on.
Starting point of the hike was at the end of a road, where the village merges into the forest. A woman with a dog called out, “You see something like this far too rarely.“, several cyclists greeted us and wished us “a beautiful day and a pleasant enjoyment of nature“. When we encountered a family at a rest in between their cycling tour, the father asked us some questions with interest, among others about the law, whether nude hiking is allowed. 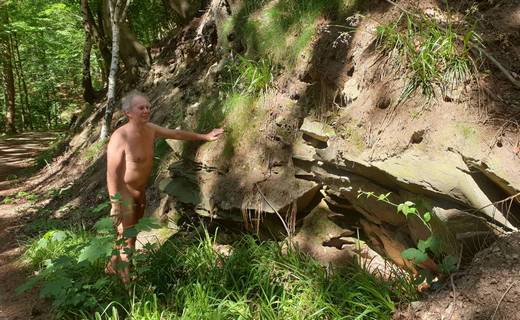 Image 1 of 7: Hiking in Bergisches Land near Wuppertal 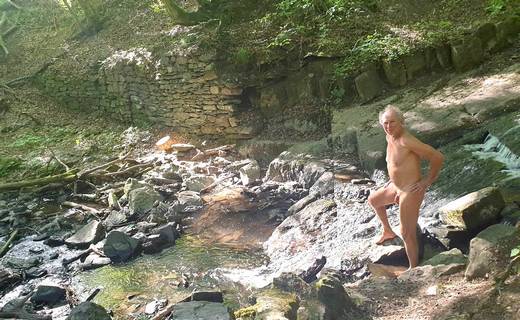 Image 4 of 7: At a creek
He was also very surprised, that we were also hiking barefoot. However, we were able to give him some examples of damage to the stability of people (poor balance, impaired mobility, and an independent risk factor for falls) as a result of toe malpositioning and tendon shortening, which are practically always caused by footwear.

One of the hiking trails in Bergisches Land is of course the “Bergischer Weg“, which the two hikers followed for a stretch. On the way, there were sections with almost no encounters, then again with considerably more.
The path partly passed close to edges of some Wuppertal districts, partly through dense forest with rocky, craggy mountain walls, for the explanation of which we would have liked a geologist from the University of Wuppertal to join us on the hike.
It is wonderful to find such an impressive natural space in the middle of a big city. Ponds and, of course, the Wupper with its strong current provided welcome refreshment for the hikers.
– Report and photos: Rainer

Reports about West Germany – except Westphalia

On a sunny Sunday in June, two nude hikers chose Bergisches Land as their destination. This time, they opted for a 16 km route about 5 km away from Wuppertal-Elberfeld in a wooded area on...

For book author Marc, the subject of nudity is reason for a research trip around the world to report his own experience and feelings. Hiking in the buff is a topic. He went on a nude hike with us...

First fill out ballot papers, then hike in the buff – that was the motto on the second Sunday in September, after Michael had chosen eastern Eifel Mountains as his hiking destination at the end of...

Birgeler Urwald [en: Birgelen Primeval Forest] is a natural naturist area in the “Nature Reserve Maas-Schwalm-Nette” between the rivers of that names in Western Germany and the Limburg District of...

Michael, since some time recurrently being initiator of nude hikes in the Eifel Mountains, had invited to a hike near Blankenheim. Here's his report: Hike in Eifel Mountains Extreme heat during...