"A bathing suit to climb into a river – in the Middle Ages you could have found that ridiculous! This was proved by a treaty of Frederick II, of which a copy was made in Lorraine in the thirteenth century. A miniature painter has illustrated the copy with a depiction of St John, who swims in his birthday suit near Patmos in the sea. At the waterside, the saint has taken trousers, shirt and outerwear – all in the style of the latest medieval fashion – off.

The bathers painted by Signorelli in 1498 are not at all ashamed of their nudity; one of them even serves as a background for a completely unimpressed Virgin Mary with the Jesus child. The clergy did not yet tend to the prudery of the reformation and counter-reformation. 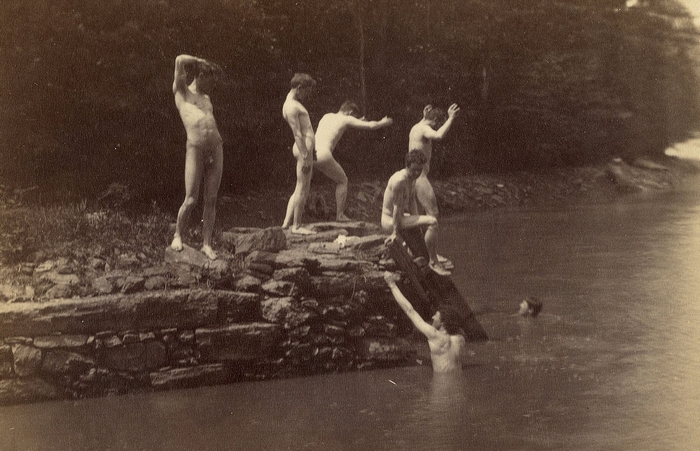 You stripped, to bathe in the sea or in a river, but also in the middle of Paris, on the banks of the Seine, where rubbernecks and salesmen scrimmaged, like a miniature to the life of St Dionysius. No one would have come up with the idea of putting on swimwear, not even those, who were ashamed of their anatomical features. Under the sarcastic looks of a Beroalde de Verville, they conceal their genitals with their hands, behind hats, shirts, or pants, until they are under water. »If they could get down the moon, they would probably keep it in front of.« It is not a sense of decency, however, when one sees, how proud others show what they have before they dive into the water.

It was not until the Renaissance, and in the Protestant countries in the first place, that there were regulations which prohibited bathing in the nude. It seems to be a paradox at a time, when freedom is given to nudity in art and the anatomy of man is as precisely pictured as never before. The motif of the lush Diana at the bathroom develops in an era, in which one forbids the women to bath in the river. However, there is always a connection between the two phenomena, a kind of balance between freedom of movement and modesty.

Thus in Frankfurt in 1541, eight people were caught swimming in the river Main, »as God had created them, completely nude and without shame.« They are condemned to four weeks of imprisonment being on bread and water. Just to make an example of it was not enough. In 1548, the municipal authorities asked the masters »to exhort their apprentices to put their underwear on when bathing.« The legal ordinance is renewed in 1550: the apprentices are to go into the Main only »covered and decent«.

Threat of punishment, fine, jail, confiscation of clothes: nothing is of any avail. The apprentices still show their nudity in the middle of the city. A century later, the feud on underpants comes to an end, when the authorities ultimately forbid any bathing in the river at all."