Unfortunately, registration via the natury calendar of naktivities was exceptionally not possible this year.

Kunsthal informs you in short on “SAT 6 JUN 18:30-22:00 We Are Anmals Naked Tour“ (kunsthal.nl) about the exhibition's concept and the “Naked Tour“. When you click the button “BOOK YOUR TICKET HERE!“ at the end of the page, Kunsthal's online booking system informs you:
“Sorry, there are no more online tickets for the selected date. Please choose another day.“

You can find information about the Corona rules at Kunsthal in Dutch and English on Kunsthal's website.

Due to standard Corona measures (mouth-nose protection, time slot, and limited number of participants), we ask you this year to arrange your own visit to Kunsthal via online ticket sales. Kunsthal does not require prior testing, however, for a stay of longer than 12 hours in the Netherlands after entering from Germany, a negative test is mandatory according to current information (15 June 2021). As soon as a normal visit will be possible again in the context of Corona, we will gladly arrange the initiative for a visit and, if necessary, a German dubbed translation of the guided tour for you.

with outages ranging from a few minutes to almost 2 hours. We apologise for these instabilities. The cause was heavy server load by so-called bots (“robots“), i.e. software-controlled users of the website. We are still in the process of clarifying exactly, which bots were the cause, in order to be able to avoid future disruptions. As soon as we have clear results, we will report. In the meantime, we ask for your understanding and, if necessary, your patience!

With the move to a new server, the individual language versions of the natury website have also their own URLs: natury.info (EN), natury.nl (NL) and natury.fr (FR) are now set up alongside natury.de (DE) in an independent installation. The move has – of course – caused some tidying up, and we apologise for any small inconvenience this may have caused! We are working diligently to ensure, that everything runs smoothly again soon…

In particular, URLs have been simplified:

Also, we have switch from long so-called relative to shorter direct URLs. Examples:

The natury website offers several menus, which appear depending on the size of the screen and window. Whether you use a large monitor at a desktop system, a notebook, a tablet, or a smartphone, you will find appropriate navigation tools.
Also, there are selective tools “Select article“ and “Sitemap“ as well as a search tool for one or several keywords near the bottom of each page. A so-called breadcrumb tool below that displays, where you are in the menu structure letting you navigate up by one or several steps.

Protest against poisoning in forests successful [17 May 2021]

In spring 2019, more than 100,000 people joined efforts in a petition at change.org to fight “poison named ‘Karate Forst flüssig’ [en: ‘Karate Forest liquid’] to be sprayed in Brandenburg's forests“ – contrary to plans of the Ministry of Forestry in Potsdam. The petition was successful: The Higher Administrative Court banned the spraying due to a law suit by NABU Brandenburg. [en.wikipedia.org: The Naturschutzbund Deutschland e.V. ("Nature and Biodiversity Conservation Union") or NABU is a German non-governmental organisation (NGO) dedicated to conservation at home and abroad, including the protection of rivers, forests and individual species of animals.]

Our citizens' action now has a monument: the “Stone of 100,000“ commemorates 100,976 signatories of the successful petition! 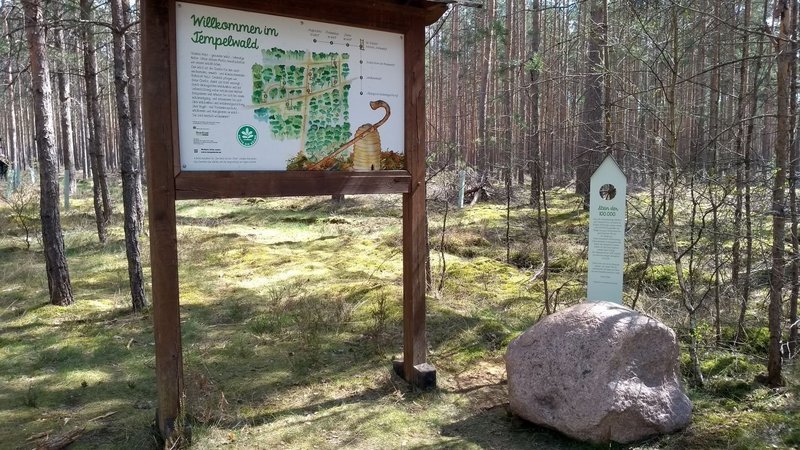 This map Borkwalde, Siebenbrüderweg shows, where the “Stone of 100,000“ is located.

In Granada's Europe League match with Manchester United, the streaker Olmo Garcia Guerrero once again managed to dash naked onto the pitch and demonstrate for better connection with nature.

Bernd informed us about an article in Austrian newspaper Kronen Zeitung: “LOKALE BERÜHMTHEIT: Nackter Flitzer regt bei Granada gegen ManUtd auf!” (krone.at). Many thanks for that!

This newspaper article informs, that Olmo is well known for strolling around in the buff in Granada – the Spanish city, where he lives. Also, it informs about a Nude Pilgrimage reported by national and international media. In an article of Galician newspaper La Voz de Galicia [en: The Voice of Galicia] “SANTIAGO: ¿Quién es el peregrino que hizo las últimas etapas del Camino desnudo de pies a cabeza?” (lavozdegalicia.es), you may read more and watch photos concerning that.

A magistrate's court in Chelmsford (county of Essex in England, about 45 km northeast of London) has fined a 27-year-old man £180 and ordered him to pay compensation to the victims.

He had insulted two nude cyclists, who were on the road as part of the annual World Naked Bike Ride (WNBR), in a very nasty way. The cyclists had recorded his rant on video and filed a complaint to the police.

This verdict is remarkable in a country, where a man like Stephen Gough already had to spend more than ten years in prison, just because he hiked in the nude.

In the present trial, however, it was not about the judicial evaluation of nude cycling, but about the insulting remarks towards the nude cyclists. The WNBR is a registered and approved naked cycling event in England.

On a sunny Sunday in June, two nude hikers chose Bergisches Land as their destination. This time, they opted for a 16 km route about 5 km away from Wuppertal-Elberfeld in a wooded area on both sides of Wupper River. A cumulative 640 metres of altitude testify to the fact, that Berg...

D · Summer anticipations in Münsterland at end of May [2 June 2021]
Our hike went along a small country road with buildings of a farm on both sides, father and son were riding scooters back and forth in a relaxed manner. The father asked us in a good mood, “Well, has summer begun?“ We smiled back and answered: “Oh yes. We are enjoying it!“. Spontaneously, we  …

D · Biking in the buff on a summery day before Easter [1 April 2021]
In 2021, the first summery day with maximum temperatures above 25°C took place on Wednesday before Easter. Only a few commercial aircraft, again polluting the atmosphere, disturbed the blue sky. In 2020, natury reported: "[…] There were only a few other cyclists on the paths in the southern …