When nowadays a guest arrives after a somewhat longer journey, (s)he is offered to wash the hands, to drink something, or maybe to eat. This is an ancient tradition. At times, when the roads were still unpaved and dusty, when traveling on one was traveling on foot or on horseback, at best in a carriage, traveling was often long, and one always arrived dusty and soaked with sweat.

From the ancient world to modern era, therefore, guests were offered a bath in the first place – even before a refreshment –, which the traveller generally accepted with gratitude. The kettle with hot water stood on the stove anyway, the hot water was poured into the bath tub, tempered with cold water, perhaps even ameliorated with a few fragrances. 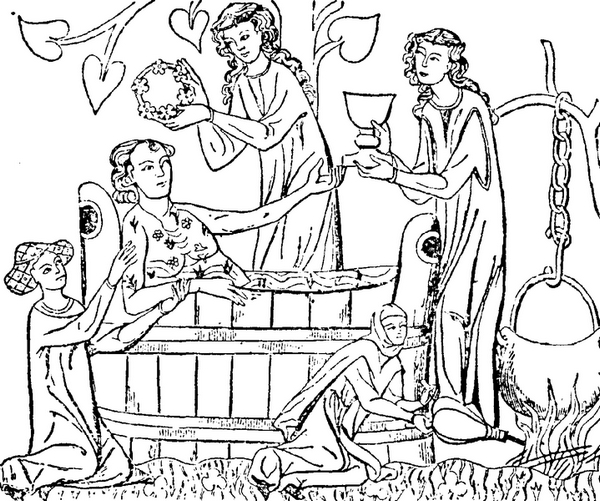 Then the guest could undress and climb into the soothing waters. Shame as to nudity at the bath did not exist. For centuries, perhaps thousands of years, one had been accustomed to bath in the presence of other people – most of the houses had only a combined living-bedroom with cooking-places, and, of course, the bathroom also took place in this (one) room.

It was probably one of the self-evident practices, that members of the opposite sex kept themselves away from the bathing, but the host(ess) assisted in bathing with the introduction of fragrances, the service, the draining jug with bathing water over the back of the one bathing, or to hand a towel at the end of the bath.

According to this bathing tradition, also bathing in a river or at sea was exercised in the nude – a shame as to nudity when bathing did not take place. Just with the beginning of the modern era, this began to change. Jean Claude Bologne has put the introductory chapter of his book “Nacktheit und Prüderie“1) | “Histoire de la pudeur“ to this subject.