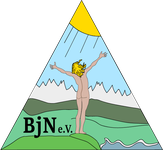 Members decide themselves, which initiatives are to be taken.
A project worth supporting!

In August 2016, young naturists went on an exploratory tour into the past, following the traces of the life reformer Fidus (Hugo Höppener, see chronology 1887), who attracted worldwide attention, especially because of his Prayer of Light, which became an icon of the youth movement at that time.

The operator of the BjN website judged natury's article concerning naturism and puberty so plausible, that he published it (with natury's consent) as “Naturismus & Pubertät (Jugend & Nacktheit/FKK)” (junge-naturisten.de) in the BjN blog.