The Genesis of the Bible, especially the story of the fall of mankind, is a confusion of cause and effect. I do not want to blame the authors of the Holy Scripture, who told the story wrongly. At that time, the science of ethnology was still unknown, and the results of this field of research were not yet available. That is, why the Bible authors had to come up with a story, that corresponded to the state of knowledge and the prevailing idea at that time, and that could also be understood by the people at that time.

But here I tell you, how it really happened, how sin came into the world: 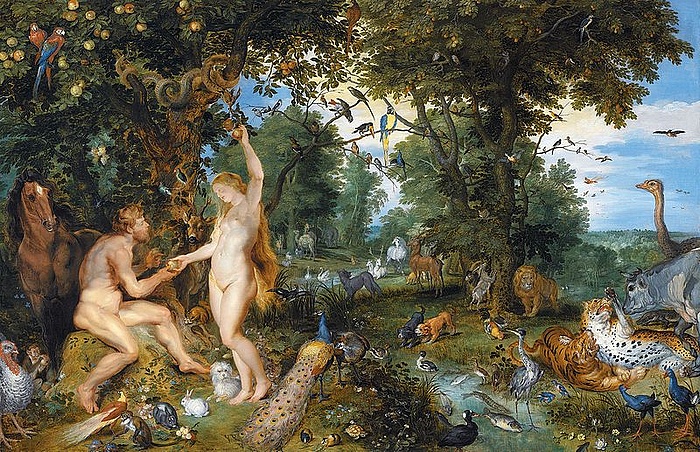 Jan Breugel, The apple of the tree of knowledge

What does all this have to do with the Fall of Mankind? A lot! As long as people were in the nude, there was no sin. We know from our own experience, that people in nude society are more considerate, thoughtful, loving, and caring with each other, than in a dressed group. This socializing effect of nude togetherness is certainly not a new experience, but also shaped the primeval societies of early humanity.

The status effect of clothing quickly led to dependencies and the exercise of power on the weaker – sin was born by violating the human rights of the less well-off and openly demonstrating inequality through jewellery and clothing. So sin and injustice are the result of clothing – and not, as the Bible says, people suddenly discovered that they were naked after committing the original sin and covered themselves up. You've got the cart before the horse!

The same conclusion is also suggested by the fact that in all known, naked societies there was a strong tabooing of sexuality, which was subject to strict rules and threat of punishment. Thus, sexual assaults, in particular attacks against existing civil partnerships or young people, were effectively avoided. With the invention of clothing, perpetrators could hide themselves and their intentions, exhibitionists and sex offenders could prepare their deeds and surprise their victims. The clothes made such actions possible – people living nude do not tend to become sex offenders!

Cain's fratricide against Abel would also have been unthinkable without clothing: To defile one's own naked body with one's brother's blood is an unpleasant thought. To take off clothes dirty after the murder is done and to replace them with clean clothes is the much easier alternative, especially since it makes it easier to remove the traces of the crime. Clothes make perpetrators – people living nude do not tend to become murderers!

Distrust and envy, which provoke theft or robbery, are also a consequence of the development, that status symbols such as jewellery or clothing were worn openly and thus the temptation grew to seize these status symbols by robbery or theft. Clothes create robbers – amongst people living nude do not tend to steal!

Of course, human primeval societies living in the nude might have had also hierarchies, just as behavioural research has observed them in monkey societies, for example. Of course, we know nothing about the form, which of such social structures early human societies developed and what the consequences were for the individual.

But with the development of jewellery and clothing, these structures were visibly accentuated and thus increased – and with it the tensions between people. Increased tensions necessarily lead to increased assaults, both in the exploitation of dependencies and in the rebellion against existing structures. Clothing thus led to an increase in strife and the occurrence of criminal deeds: Clothes created sin.

And not the other way around.

1) However, the lush vegetation and paradisiacal conditions were by no means constant. Rather, in the "cradle of mankind" there were frequent and violent fluctuations between humid-rich (tropical) and dry sparse (savannah-like) vegetation. According to a rather convincing theory, it was precisely these changing challenges of the living environment, that allowed the early human beings to mature over the course of time to thinking creatures, that had to develop their minds and manual skills in the same way, in order to survive under the changing conditions, and finally to find their way from a pure collector and hunter existence to a precautionary economy.