In 2020, the SNT offered for the first time the option to stay together in a hut during these naturist days. Also, it went more international with participants from several regions in Germany, England, France, and Czech Republic. So, after Austria and Spain, now also Saxon Switzerland in Germany is a NEWT-alike region thanks to Christian, Erik, Martin, Matthias, and Torsten.

► Thu 23 Jul: First hike in the buff from Kirnitzschtal Valley to Kuhstall Lookout and along the Flößersteig [23 July 2020]

The initial hike began at Beuthenfall in Kirnitzschtal Valley and led over clearly ascending paths and finally over ladders and stairs up to Kuhstall, where originally the stately seat of the Beuthen Nobles was enthroned, but of whose splendour nothing remains. The view of several strikingly towering stones in the surroundings compensated a little.

Afterwards the 31 naturist hikers reached the upper floor of the Kuhstall (Neuer Wildenstein) via the 35 cm wide Himmelsleiter, which is built into a narrow stone crevice. Here too, clothed groups and numerous families were in the majority, and many of them asked us questions with interest, so that several rounds of discussions about our way of hiking developed. Many remembered easily our verbal description of the URL of the natury website “nackt minus wandern punkt de”for German speakers and “hiking minus in minus buff dot info” for English speakers, to read more about it later.

Even if one or the other of them didn't want to leave the Heavenly Floor at all, they all finally cleared the terrain via the Erden-Treppe and met up again at the Schneiderloch. 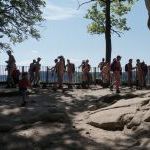 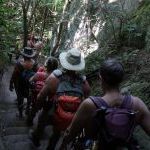 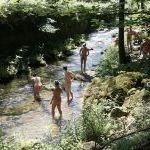 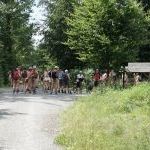 The rafting trail along the Kirnitzsch then demonstrated, how paths in the forest can look like: Tree roots form the scaffolding between which the forest floor provides gentle tread and soft support – no trace of gravel or other artificial fortifications! The other 80% of the hiking trails were much more technical, so that vehicles could also pass through.

The day ended with a visit to the restaurant Lichtenhainer Wasserfall in Kirnitzschtal Valley.

The Friday hike should start at Nasser Grund in Kirnitschtal Valley and should have a much more demanding route than the day before. First of all, everyone, who had arrived at the starting parking lot, had to wait for the participants from the hut in Ottendorf, who had decided to park at the Beuthenfall car park and hike additional 1.5 km distance to Nasser Grund and back.

The further way led to Wilde Hölle. Before entering Wilde Hölle, four of the 40 hikers decided to choose a moderate route to Idagrotte. The other 36 took a few climbing sections over large stones and narrow footpaths, which required many big steps and strength, and on their way they faced some impressive views and several “real” climbing stones along the way.

On the mostly narrow paths, the nude hiking group of 36 people met again and again with oncoming groups and families, so that there were regularly small traffic jams to let the oncoming ones pass. Most of the time there were also conversations and two young ladies with dogs were even interested in the possibility to join one of the walks of the next days. A crawling through a hole in a stone wall at Affensteinpromenade shortly before Idagrotte, through which the official hiking trail led, offered one last test with which one had finally earned the refreshment. 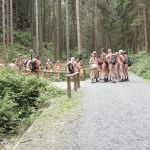 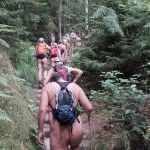 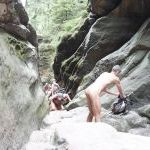 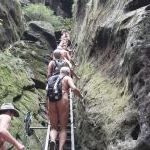 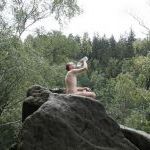 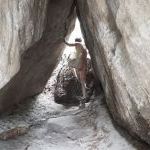 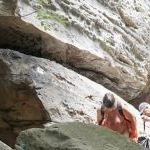 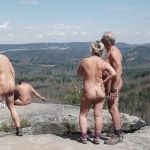 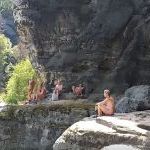 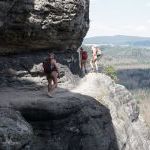 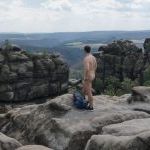 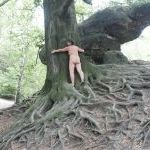 The approach to spend the lunch break together with the four hikers of the moderate route at the Idagrotte postponed lunch break for some time.

Just as steadily as the hike led uphill at the beginning, a long, partly steep descent followed – after a last, spectacular 270-degree view, which only 4 or 5 of the hikers wanted to see. After about 10 km, one could look forward to a tasty refreshment in the restaurant Zur Schloßbastei in Bad Schandau.

For the Saturday hike, 38 naturists gathered in Ottendorf at our hut, from where we hiked the first kilometre covered onto the edge of the village. Afterwards, we hiked naturally in the nude upwards to the nearby Arnstein. The partly steep ascent contained a few passages, where you had to make yourself small and slim or use your arms to reach your destination.

The medieval past as a castle still reveals a square cistern, from which, however, nobody wants to drink water today. The existing sandstone platform provided an opportunity for a lunch break and a view of the surrounding countryside. The unobstructed view to the west leads via the Raubsteiner Taufe, the Yeti, the Großstein, and the Hausberg.

Kleinstein and Kleinsteinhöhle were further destinations with a view and the opportunity to rest. On the continuing way, many observers noticed that whole arable fields were blooming with cornflowers, blood clover, cinquefoil, and various other multicolored flowering plants.

After a good 12 km, the hikers returned and could prepare for dinner at the restaurant Ottendorfer Hütte.

► Sun 26 Jul: Shelter against rain in a cave at Hintere Raubschloss and then warmth again by sun at Marienhöhle [26 July 2020]

On Sunday, a four-day series of nude hikes ended, during which the hiking group got to know former retreats of robber barons in the 15th century. The previous evenings, Martin had explained his findings about them and their connections to the Czech noble family of the Berken von Dubá.

Rain accompanied the ascent to the Winterstein, which is also called Hinteres Raubschloss. In a cave, we found a dry resting place with a view. There, we got into conversation with some young people, who tried to get dry again after the ascent with clothes and rain protection. “Yes, you are doing it right. We'd also like to hike in the nude, but there's no place to store our clothes.” Textile wearers: When it comes to nude hiking, they're not at a loss for excuses.

The rain gradually receded and made way for the first sunrays. In the course of the afternoon, more and more sunshine was present. We still passed the Marienhöhle and then ascended to the Bärfangkegel. Along the mountain ridge there were further views of neighbouring stone formations.

The inn Neumannmühle offered at the end of the day deserved refreshments and a cosy get-together.

Already in 2018 and 2019, the opportunity to explore the Elbe valley from the water by paddling nude was gladly accepted. This time, 25 naturists were interested and travelled from the hut by public bus to Bad Schandau. 24 of them were distributed to three inflatable boats, one preferred a kayak.

We experienced a hot day with many breaks for swimming and thoroughly nice encounters with numerous groups, families, or couples in boats on the Elbe and many more on the banks and on ships. Shortly before the reaction ferry at Kurort Rathen, the excitement rose, if the ice cream booth with “the best ice cream on the way from here to Italy” (that's their advertising slogan) there at the Elbe cycle path would have opened. We were lucky and could enjoy the cold goodies there again in the nude.

Shortly before Stadt Wehlen, we landed on the right, put on some clothes and bought refreshments at a kiosk. Then, we returned to the boats and undressed again for the last, short stage. After landing on the left side of the Elbe, we returned the boats and sunbathed on the meadow until the train left for Pirna and on to Pirna-Copitz.

We enjoyed the evening after a short walk in the micro-brewery Zum Giesser in Pirna-Copitz. A chartered bus later brought us back to Ottendorf. Thanks for the wonderful day!

We hiked on unknown paths and trails to one of our favourite destinations in Saxon Switzerland to discover new things along the way: Via Hohe Liebe Stone we reached Schrammsteine Stones.

The group that had chosen the easier hiking variant spent the lunch break at the Frühstücksplatz with a view of the second group's climbing.

On the further way, thanks to a slightly changed route, there was another surprise: another beautiful lookout into Elbe River Valley and onto Königstein Stone in the background.

We spent the evening together again in Lichtenhainer Wasserfall Inn at the terminal stop of the historic tram into Kirnitzschtal Valley with excellent service, food, and beverages.

We hiked from Altendorf along Sebnitztal Valley and discovered traces of the former Schwarzbach Railway. Several bathing opportunities eased the hike.

A fence blocked a meadow path around Altendorf on our way back. So we hiked nude through the small village, as we had done in 2019 on another hike.

We discovered, that the local history association of the village had announced our nude hikes around the Kirnitzschtal on its information board with the slogan "Finally something's happening". Reference was made to an article “Die Nacktwanderer sind wieder unterwegs” (saechsische.de) in the regional daily newspaper Sächsische Zeitung.

In the evening, Clarisse (France) and Jane (England) thanked Christian, Erik, Martin, Matthias, and Torsten in German and English for the joint activities. They were happy and expressed their hope, that all of us will not only be back in 2021.