Saxon Switzerland is very special. It has got its name from wonderful formed sandstone, which attracts hikers and climbers as well. Pls do not confuse it with Switzerland in European Alps. Saxon Switzerland is a part of Saxony, which is a so-called Bundesland, one of the federal parts of Germany with an own regional parliament.

Six hikers began a continuous ascent to the the Affensteine [en: Monkeys' Stones], from where you have a magnificent view. We continued on a demanding route to further locations like 'da Grotte, where we met a group of 28 young women. We defered to them waiting at the side of the road. Continuing on a descent back to the parking lot, a thunderstorm with moderate rainfall accompanied us for about an hour, so we had to scrub ourselves dry with towels at first before entering the car. The evening, we spent comfortably at Albert's home at Elbe River. A successful, but also quite demanding kick-off, with 750 m of ascent and decent and numerous challenges during the hike! 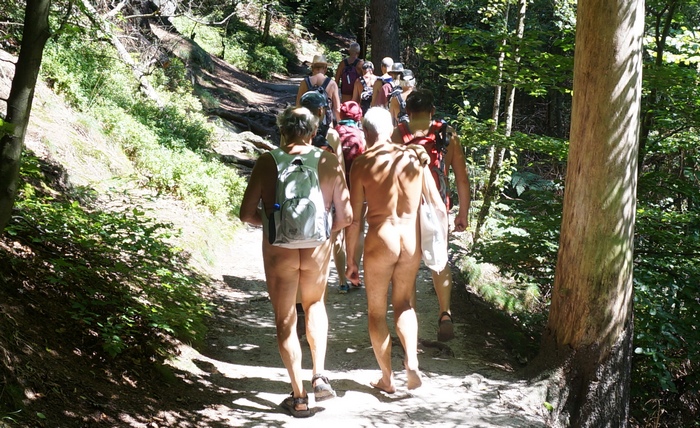 Twenty-two hikers arrived to ascent to Schrammsteine via Wildschütz Climb and to enjoy the magnificent view. We continued on a challenging path to Affensteine [en: Monkeys' Stones] with a hardly less spectacular view and after a descent and a further ascent to Hohe Liebe Mountain [en: High Love] Mountain. So, we made cumulative 472 m of ascent and descend again and got the reward of views from three summits. A beautiful tour, but to be cope with because of long climbs. 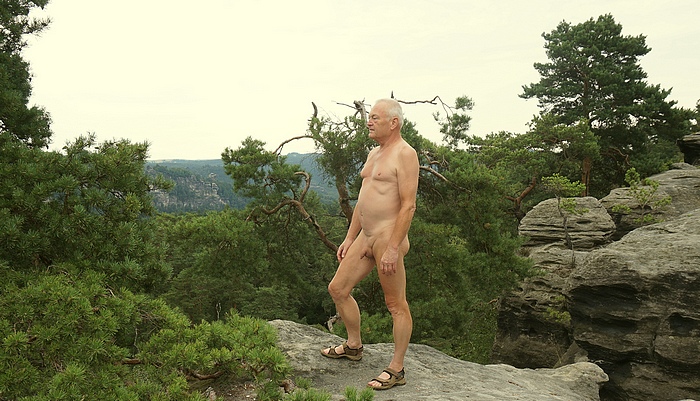 Today, 21 participants started to ascent onto three summits. Rauenstein with a view to Bastei was the first, then we went to a restaurant on top of the hill for lunch. The weather remained overcast, only a few drops fell, while we were in the restaurant.

We reached the village Pfaffendorf, from where 23 naturists climbed Pfaffensteine and visited the numerous attractions of this rock formation. In between, we had cake or ice cream in the restaurant on top of the mountain, where we could experience excellent service – clothed, indeed.

Cycle Route along the river Elbe in Königstein

35 km of nude cycling to the Czech Republic was a pleasure for the 21 participants at temperature of up to 30°C and lots of sunshine, especially as a lot of people waved us on this Elbe Cycle Route and from excursion boats. On the spot, we had lunch in a restaurant, i.e. roasted pork with sauerkraut and Bohemian dumplings for 5.30 Euro. Then we went back without any breakdown back to Pirna. 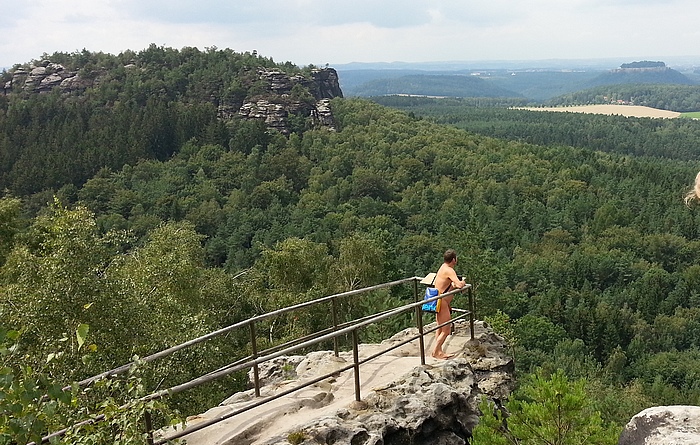 After one day being a rainy break, the weather continued on Saturday with warm (24°C) and partly cloudy weather. 25 participants hiked in the nude initially on Gohrisch, continued to the Papststein, and then finally to the Kleinhennersdorferstein. They could explore several caves. The three peaks are not far from each other and the altitude to climb in total was easy to handle. Several wide views rewarded us.

24 naturists began the hike in the Bielatal [en: Biela Valley] and went up to numerous viewpoints such as Sachsenstein, Johanniskopf' and Kanzelstein' The highlight, however, was certainly the passage to Herkules-Steine [en: Samson's Stones] (cf. photo), where several climbing teams tried to find their path. At the end of the day, the labyrinth was on the program. At up to 26°C and lots of sunshine, it was an impressive nude hike. 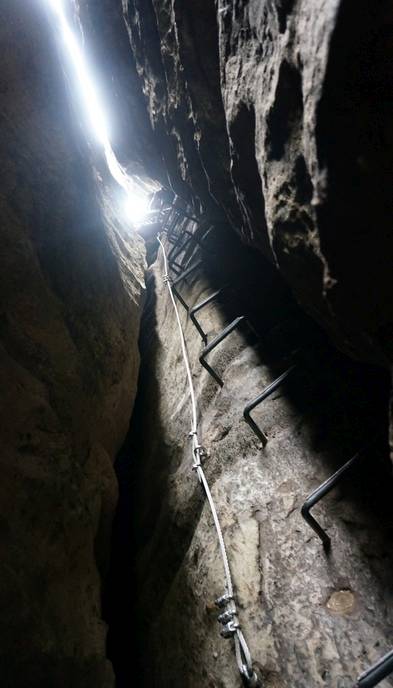 This day, the aficionados of climbing should get there desired fun. 13 of a total of 22 naturists started with Zwillings-Stiege [en: Twins' Climb], continuing through Hentschel-Stiege [en: Hentschel's Climb] (lower part and chimney) and finally through Rübezahl-Stiege [en: Rübezahl Climb]. The hikers climbed through Hohe Hölle up to Carolastein – also this ascent had some challenging passages. Again, it was warm up to 28°C in bright sunshine, so that we did not want to miss of a bath in the Kirnitzsch at the end.

Photo: A look upwards through the chimney, the upper part of the Hentschel-Stiege. You must take off your rucksack and carry it in front of you, to get through a real “between rock and a hard place” situation, but at the upper end, daylight lures.