After having experienced the first “Thüringer Naturisten-Tage (TNT)” spanning nine days in 2015, Westphalian naturists developed the idea, to implement “Westfälische Naturisten-Tage (WNT)” as well. Looking for appropiate tracks was successful. We were even more lucky, to achieve further personal goals:

Nearly everything was fine, well prepared, the weather during the week before the start summerly, bright sky, temperature above 30°C – at the beginning of the Westphalian Naturist Days, weather turned out to be moderate and partly rainy. Bad luck for the planed naktivities, but good luck for our existence, because water is the basis of life – no water, no life. Full stop. 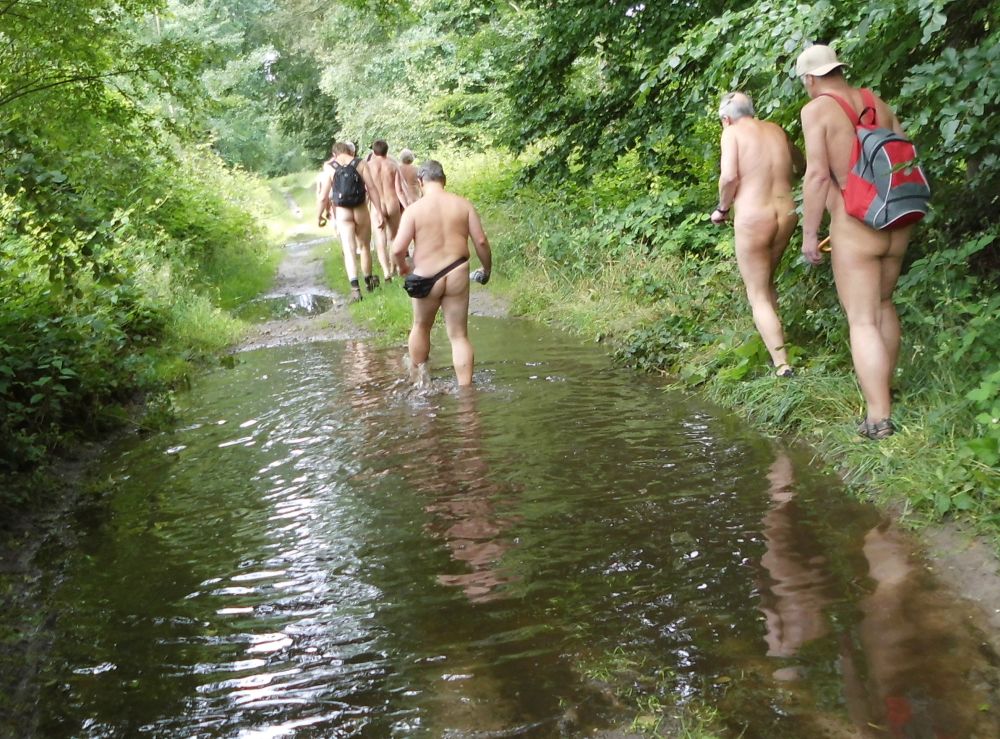 The first day of the Westphalian Naturist Days 2016 started quite humid: 18 participants started on a hike planned for 18 km. Those hikers, who carried rucksack and umbrella along, were at advantage: an abundant rain, lasting one-and-a-half hour at moderate 15°C and the tumble of a participant to the ground after slipping on wet asphalt eventually led to a strong shortening of the route. So we arrived at the restaurant hours early than planned. The most beautiful pleasure of the day was a warm shower afterwards …

Rain was over, but we still had to deal with puddles of the day before. The temperature arose up to approx. 19°C, cloudy sky changing with some sunshine in between. Some, who had to start their work early on Monday morning, graded the total distance of 24 km as a little long for them and therefore formed a small group of short-distance hikers, satisfied with 15 km of hiking. 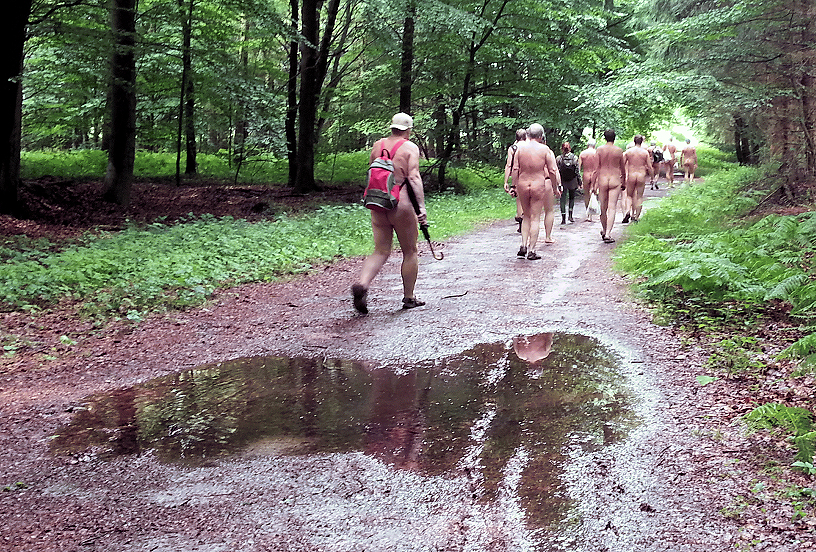 Saturday's rain was still in the puddles, but with 22°C and alternating cloudy weather with occasional clearing ups, the hiking conditions in the Osnabrücker Land were not so bad. We hiked between Mittellandkanal Channel, forest and, arable land. 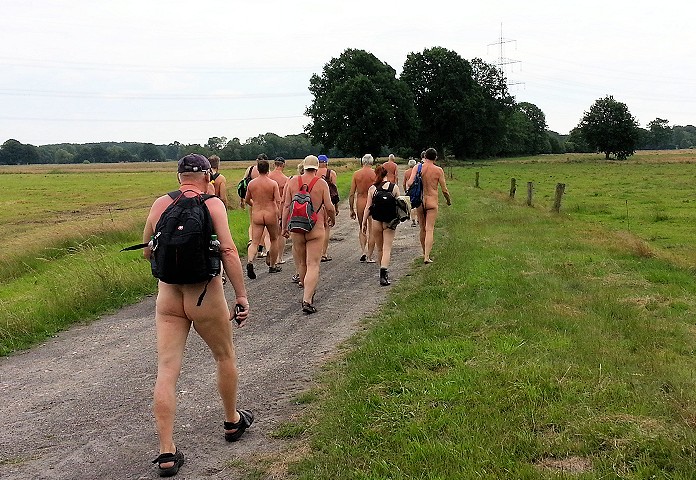 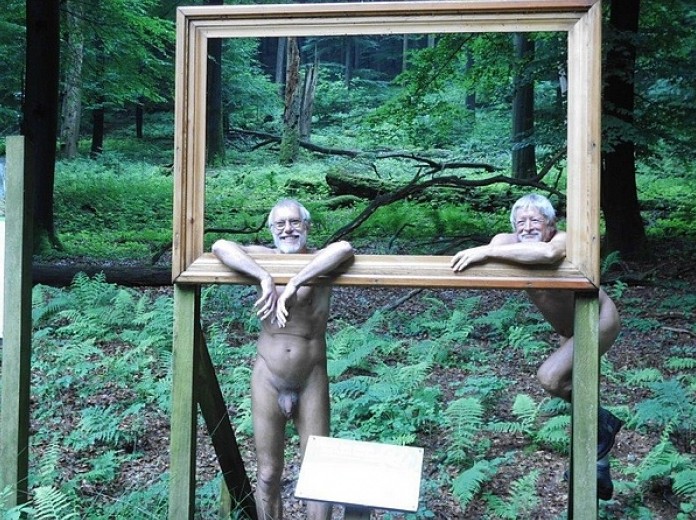 Natural art in the woods

A course of 17 km, slightly changed due to some too slippery parts of hte planned route, finally led us to a bathing pond and ended in a basin for hydrotherapy according to Sebastian Kneipp. On a bench for dangling your feet, we could get the feet, which we just had cleaned in the basin, dry again by dangling them in the sunshine, while patiently unwinding ourselfes.

Finally sun and warmth: up to 25&°C rose the thermometer, and a lot of sunshine accompanied the 16 hikers through the Paderborn Land – well, that a large part of the hike led through forest. In the Eggegebirge, a cumulative increase of 570 m in altitude had to be made. 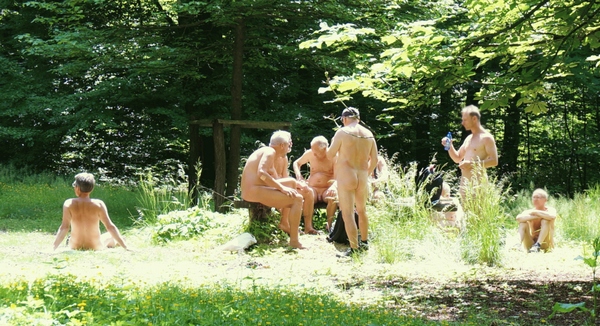 Break in the woods

Part of the 18 km long hike led along the viaduct path from which we could look at the large and the small railway viaduct at Altenbeken from varying perspectives. After such a lot of physical exercise, we enjoyed finally a tasty dinner, to relax and to replenish our energy.

On the hottest day of the Westphalian Naturist Days with 34°C and 14 hours of sunshine, 2 groups formed: 10 participants used the flat land for bike tour of 50 km, which i.a. led to the lookout tower on the green banks of the Ems River. Later, a blowout caused the cyclists to shorten the tour by a few km. While we were busy with the repair, two police officers, who passed us on a bike patrol [Yes, that is part of normal business in Germany!], greeted us very nicely. 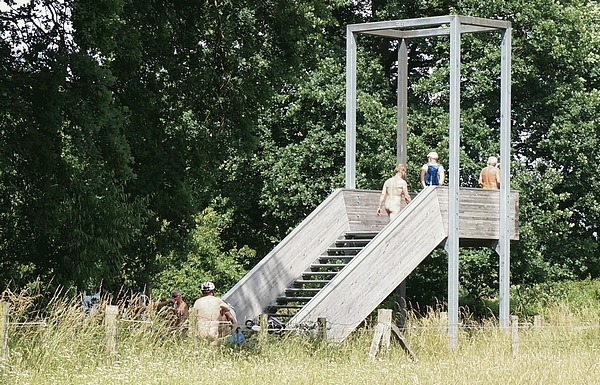 Lookout onto renatured area of
Ems River between Warendorf and Telgte

The members of the other group opted instead for a combination of hiking and track swimming: It was a deeply impressive, almost dreamlike experience, to be carried in the backstroke of the flow of the Ems through the romantic natural world of the watercourse!

Naturists fell the climate change directly: Heavy rain in the morning turned hiking and biking paths around Altenberge into a dangerous course, so that we had to cancel at short notice the naktivity on Friday due to danger of tumbling.

The forecast for Saturday announced heavy rain again all day, which let us to the decision, to cancel that naktivity as well. Wheather forecasts announce 100% probability for rain absolutely seldom  – it's quite uncommon, to be able to commit so clearly in the weather. But now!